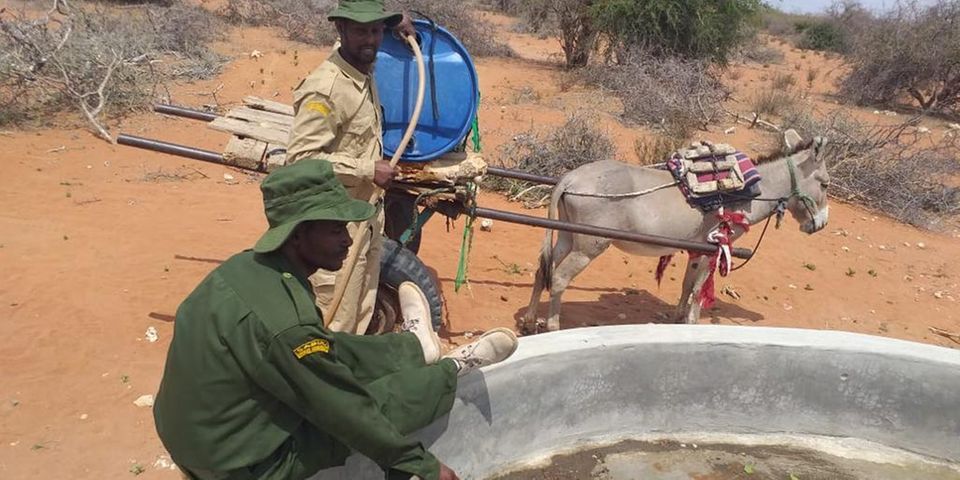 In Habaswein Sub-County of Wajir Countyn is Sabuli Wildlife Conservancy, which forms part of Sabuli Division. The conservancy is billed to be a promising tourism destination in the north eastern region.

Established in 2018, the conservancy is home to lions, the endangered reticulated Somali Giraffe, Grévy’s zebra, the orx, the Somali ostrich, gazelles and hyenas.

Cheetahs, lesser kudus, monkeys and buffaloes are among other wildlife species found at Sabuli.

The establishment of Sabuli Wildlife Conservancy four years ago remains one of the goals adopted to mitigate against climate change and its adverse effects and as a livelihood safety net to cushion locals from losses of livestock to frequent droughts. This is according to Mr Mohamed Sharmake, the chairman of the conservancy.

A population of about 50,000 people is expected to benefit directly from this conservancy.

Mr Sharmake says the conservancy will promote healthy ecosystems that support wildlife, livestock and human needs. It will also improve the conditions of degraded areas and minimise invasive species and ensure adequate supply of water for wildlife, people and livestock.

Provision of water at the conservancy and dealing with poachers are some of the urgent priorities that need a solution.

“There is a potential of having a tourism attraction facility in Wajir if we get resources provided and Sabuli Wildlife Conservancy is among the most promising. We have many wildlife species but our region’s potential has been ignored by successive governments,” Mr Sharmake says. 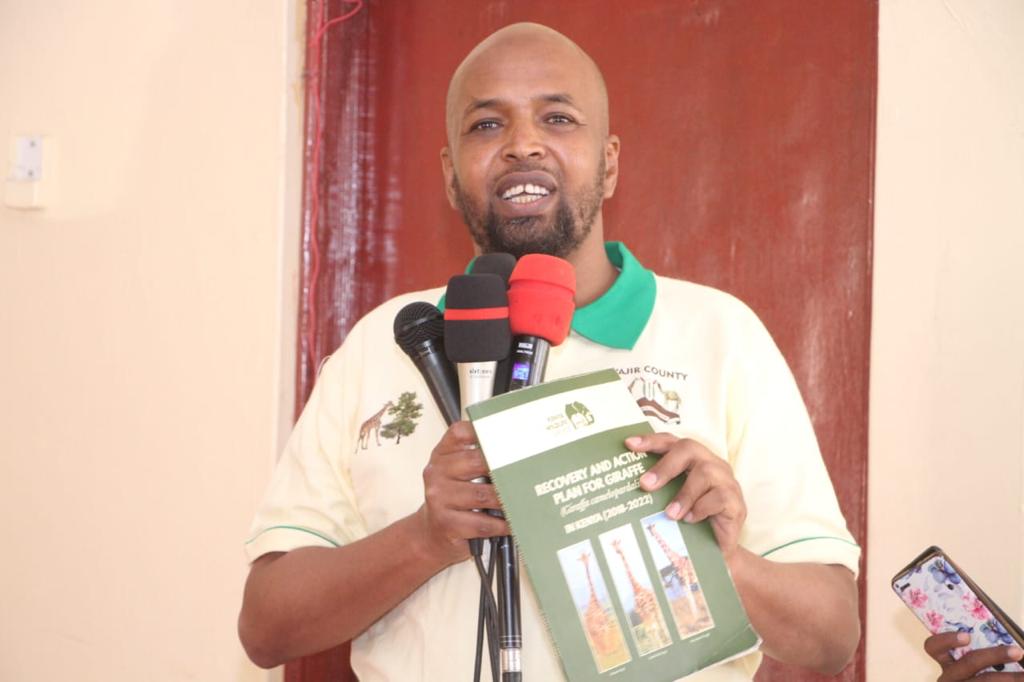 He says he decided to take up wildlife protection and conservation after his own mother poisoned a lion that had devoured his camel.

“I had a passion for wildlife and started conservation and protection of the same after a lion fed on my camel while I was away. My mother, just like many residents of Wajir, did not understand the importance of wildlife in their midst; they poison lions and hyenas,” he says.

The conservancy runs under the vision of a vibrant and prosperous relationship between the people of Sabuli and many species of flora and fauna that populate the area.

To ensure proper conservation of wildlife, the conservancy’s management has introduced mitigation measures including water trucking.

“We have introduced camel carts for us to be able to get water into the conservancy for the survival of the wildlife,” Mr Sharmake says.

Wajir County, where the conservancy is located, is within an arid and semi-arid area and Mr Sharmake says that availability of water together with other key conservation measures is important in the preservation of wildlife.

“We came up with the camel cart after we failed to get enough water for the wildlife but realised the new cart has the capacity of a thousand litres of water that can fill several troughs in the conservancy,” he says.

The Wajir County government has promised to repair a water truck that will be used to supply the essential commodity to wildlife at the conservancy during the dry seasons.

Mr Sharmake cites poaching by refugees from the Dadaab refugee complex as among challenges faced at the Sabuli Conservancy. 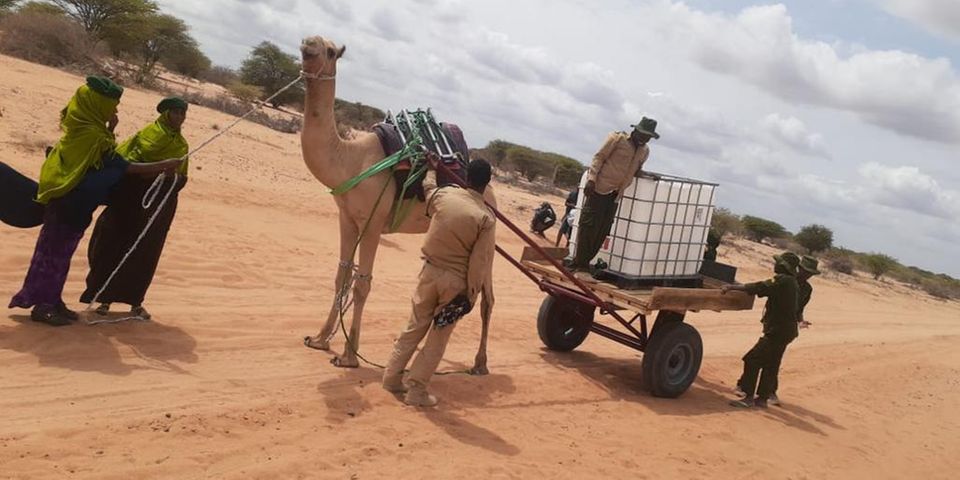 “We are about twenty kilometres from the Dadaab refugee camp and the refugees come to collect firewood and building materials from the Sabuli area. They poach for bush meat at the conservancy and hunt the giraffes to sell in the refugee camps and beyond.”

The most hunted animals are gazelles, antelopes, dik diks and giraffes which are killed for meat.

There has been an increase in hunting of giraffes within Wajir County as a dietary supplement since the outbreak of Covid-19.

“The Somali giraffe is at risk of extinction as our people kill it for perceived medicinal value. They believe the soup from the meat heals infertility,” he says.

The outbreak of Covid-19 has led to a decrease in the giraffe population in the region as the Somali community hunts believing it can treat the ailment.

“Currently, this unique and endangered giraffe is being hunted on the belief that it treats Covid-19 but we are doing our best to counter this myth,” Mr Sharmake says.

Starting the Sabuli Wildlife Conservancy was never a walk in the park as Mr Sharmake narrates.

“We conceived the idea in 2011 but the community did not see the need for keeping wildlife at the expense of their livestock,” he says.

He says getting the community to give part of their land for this noble enterprise was never that easy.

“Nobody understood how the wildlife was beneficial to them but our persistent negotiations and engagements bore fruit in 2018,” he says.

He says loss of grazing land and the human-wildlife conflicts were among the pointers that led to resistance from the community.

Despite the conservancy now employing at least 30 wildlife rangers under the government’s Post-Covid-19 Economic Stimulus Programme, the management is appealing for funding and support in ensuring prosperity of the wildlife habitat.

The conservancy is investing in infrastructure and equipment to facilitate effective operations, support tourism as well as improve access to transport for locals.

Sabuli was started to promote peaceful coexistence among clans residing in Wajir County as the area experiences inter-tribal conflicts.

Mr Sharmake says the conservancy will also promote land and natural resources management in the area.

Under the North Eastern Conservancies Association (Neca), several conservancies in the north eastern region have come together with the aim of bringing together indigenous communities to live in harmony with wildlife.

“At Neca, we are keen to become a regional association that supports grassroots wildlife conservation and the wellbeing of the local communities,” Mr Sharmake, an honorary warden, says.

Neca works with local pastoralists and landowners to manage and conserve available unique landscapes, their wildlife and habitat for the benefit of the local communities.

“We are operating on a win-win platform that leads to wildlife conservation and community livelihood through employment creation and tourism,” he said.

Mr Sharmake says the association is keen on improving livelihoods of the local communities through sustainable tourism.

The association is also focusing on supporting women’s rights and affairs in the society.

This is happening as most women in the pastoralist communities continue being overlooked and secluded.

Gender equality is yet to be embraced among the pastoralist communities as women are not allowed to own property.

“Neca acknowledges the gap and moves to help achieve gender balance in conservation while empowering women by actively including them in decision making processes and establishing income generating activities for them,” Mr Sharmake says.

Neca and the Sabuli Wildlife Conservancy management are among partners and organisers of Somali Cultural Festival currently underway at Two Rivers Mall in Nairobi.

“We are at Two Rivers Mall and this is the first-ever Somali arts and culture fair to showcase the incredible talents and beautiful customs among the community. Together with Kenya Wildlife Services, we are here to educate the Somali community and other visitors on the importance of wildlife conservation in our region,” Mr Sharmake says.